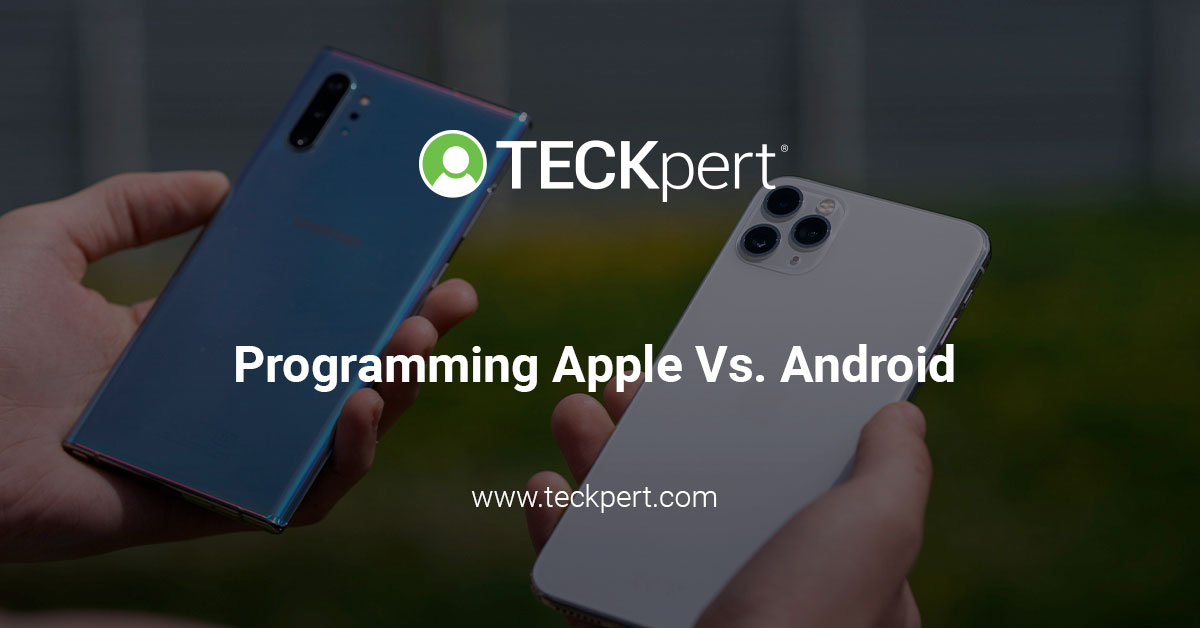 Different platforms require different programming languages – or at least favor them. For newer developers, it can be easier to start creating applications in Swift for iOS vs. the Java/Kotlin based apps that live in the Android space. Or it may be worth it to pursue a cross platform option such as Flutter or React. If apps are your bread and butter, don’t miss out on this comparison: Programming Apple Vs. Android.

We’ll kick this off alphabetically and start with Android. As with development for any other platform, setting up your environment is step one. Building apps for android is done mainly via Java, Kotlin, and other versatile languages but there are a few additions you need to add to get started.

An IDE (integrated development environment) that will allow you to input your Java/Kotlin code and use all of your other dev tools; like APIs and libraries.

A file library crucial to beginning and developing apps for Android. The SKD (software development kit) includes virtual device managers and an ADB bridge, plus a repository of code to integrate Java platforms with Android.

No development project is smooth sailing 100% of the time, these are the top 3 challenges for developing for Android:

As Google releases new versioning, Android developers wind up with multiple versions to contend with that are not seamlessly compatible. This makes it a challenge to leverage updates and new feature releases.

iOS has a standardized interface across their entire product line. Android does not, so developers are faced with additional UI challenges for managing layouts and device responsiveness.

The main two supported languages for Android are Java and Kotlin, Kotlin is Android’s growing version of Swift, where functions are streamlined and the language is built-out for the specific use cases of developing Android Apps. Similar to a growing population that hasn’t built up enough housing and parking; Android frameworks still do not universally support Kotlin.

Generally speaking, iOS apps are not only faster to develop but are less expensive to develop and maintain. This is mostly attributed to Swift, Apple’s native programming language which is less code-based than its Android counterparts.

Swift has a high level of readability and is more user-intuitive than Java. It is also the product of decades of iOS specific development projects so it streamlines syntax for named parameters, and streamlines integration/readability for APIs. It also eliminates the need to type semi-colons 😉 .

XCode is Apple’s IDE and it has a lot of built-in bug fixing tools. XCode includes the bulk of Apple’s developer documentation and Interface Builder.

Keeping it fair, here are our top 3 challenges for developing for iOS.

Though not as apparent of a problem when compared to Android – iOS is famous for releasing software updates that render older applications incompatible within a relatively short lifespan. So deciding which version of iOS to develop for can be a challenge.

iPhones don’t come with a garbage collection function. If you select an iOS version to develop for, it doesn’t mean that the user will run it on that specific version, or specifically on a mobile device – and different Apple devices have different storage capabilities.

Once you’ve developed your app, there’s no guarantee that Apple will publish it to their store. There is an approval process to get through that can create challenges.

Languages like Kotlin and Flutter are making it easier to code apps that work across platforms. If you’re taking the One App to rule them all approach, here are some things to be aware of.

We’ve mentioned it already, but it’s worth mentioning again when talking about languages that support app development across platforms. Kotlin, though an Android heavy language, is making strides to be compatible with iOS but there will always be versioning issues – and one of the specific challenges will be programming to accommodate for both iOS and Android versions simultaneously.

Flutter’s tagline is “build apps for any screen” and this language allows you to build natively compiled apps for both iOS and Android using a single codebase.

Flutter is Google’s open-source UI framework – this frontend tool is becoming more widely adopted for mobile app development based on its versatility and ease of use but it’s not without its limitations. As this is a google-based language, the support for iOS features is lacking and Flutter’s libraries are more limited than its platform specific counterparts.

React Native (RN) is an open source framework and is one of (if not the most) popular framework for building mobile apps – with the same main advantage as Flutter – that it supports the creation of an application for both iOS and Android through the same codebase – but with robust support for high quality user interfaces.

The framework has been around since 2013 where it was developed during an internal Facebook project, and was subsequently made available through github.

Though they have a long way to go to be universally compatible, cross-platform languages tick off a few really significant boxes like; the ability to make instant changes to an app in order to update or bug-fix, and the efficiency of using a single codebase to develop for multiple platforms.

Regardless of your needs – or whether you decided to build for Android, iOS, or choose a cross-platform approach, TECKpert can help provide quality developers and resources to execute any application from development to release. Reach out to us to get started!