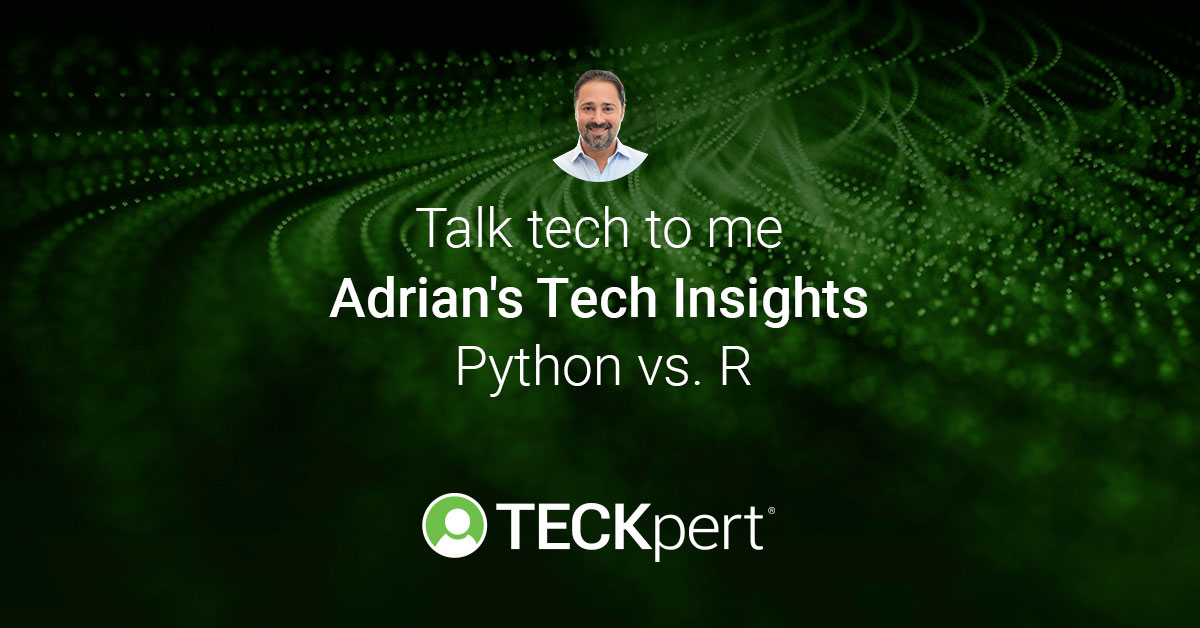 We love a good trend battle, and the debate on Python vs. R is a juicy one in the world of data science. So what are the deciding factors in this language war? Software ecosystems? Skill level? Tasks?

Python is a popular language in general – not just for data science – in fact, it’s in the top 3 most common languages for use along with C++ and Java. Maybe it’s Python’s growing popularity for machine learning and AI applications, or maybe it’s widely touted as an easier language to learn.

This plus its ease of use means that Python is great for rapid application development and readability making it a low-maintenance option for developers.

Not to hit you with a technical definition, but it’s a bit inescapable with R, a highly statistical language that is a child of S language which is a language specifically for statistical computing and graphics.

R provides a wide variety of statistical (linear and nonlinear modelling, classical statistical tests, time-series analysis, classification, clustering, …) and graphical techniques, and is highly extensible. The S language is often the vehicle of choice for research in statistical methodology, and R provides an Open Source route to participation in that activity.

R is often the go to for research requiring statistical modeling and graphics, and it has a lot of perks for storing and analyzing data.

How Are They Different?

On the surface we can say that the main difference between Python vs R boils down to General vs Specific. This doesn’t mean that R can’t integrate with other languages and applications, and it doesn’t mean that you can’t program specific statistical models with Python.

Let’s look a little deeper into some of the differences.

Python, like we said, is a great general programming language which does come with some advantages. Particularly when your goal is to deploy models into other software, with Python there’s no need to write in other languages when you can build the entire application from start to finish.

R was built for statistical modeling, so naturally it has a wider selection of model types to choose from – if you’re building exceptionally detailed statistical graphs, S language runs under R unaltered.

Data is R’s wheelhouse so if your strengths don’t lie as much in data modeling as you would like, R may be a better option for its resources.

What Are Your Project Needs?

When it comes to data projects both Python and R have their own strengths and advantages – so in our opinion, the choice boils down to some more human factors.

Who is it for?

Python was built for developers and R was built for researchers and statisticians. Asking who is going to be using and manipulating the data may have a big impact on how you decide to build the applications. More comfortable with software and familiar with other languages like Java? Then Python is probably your best bet.

R contains packages, collectively called the “Tidyverse” which is a “collection of R packages designed for data science. All packages share an underlying design philosophy, grammar, and data structures.”

These packages make it easy for those not super familiar with coding to be able to use and manipulate data for graphics and reporting.

The Best of Both Worlds

Even though blogs and users pit R and Python against one another in a comparison battle, you don’t actually have to choose one or the other exclusively.

If you want the statistical specificity of R but the usability and wider application of Python, you can always opt to run R code from Python with rpy2 – an interface to run R embedded within Python processes. If you prefer the other way, you can run Python from R with reticulate.

Deciding on language has a lot of factors, from what’s in your stack, to what languages your company or client supports, to what is being used to develop similar products in the market. Data applications themselves also take a certain level of skill to build.

We can help you decipher the industry and prioritize your project goals. We can even help you find the best specialized developers for the job (whether it’s Python or R). Reach out to us today to learn more!