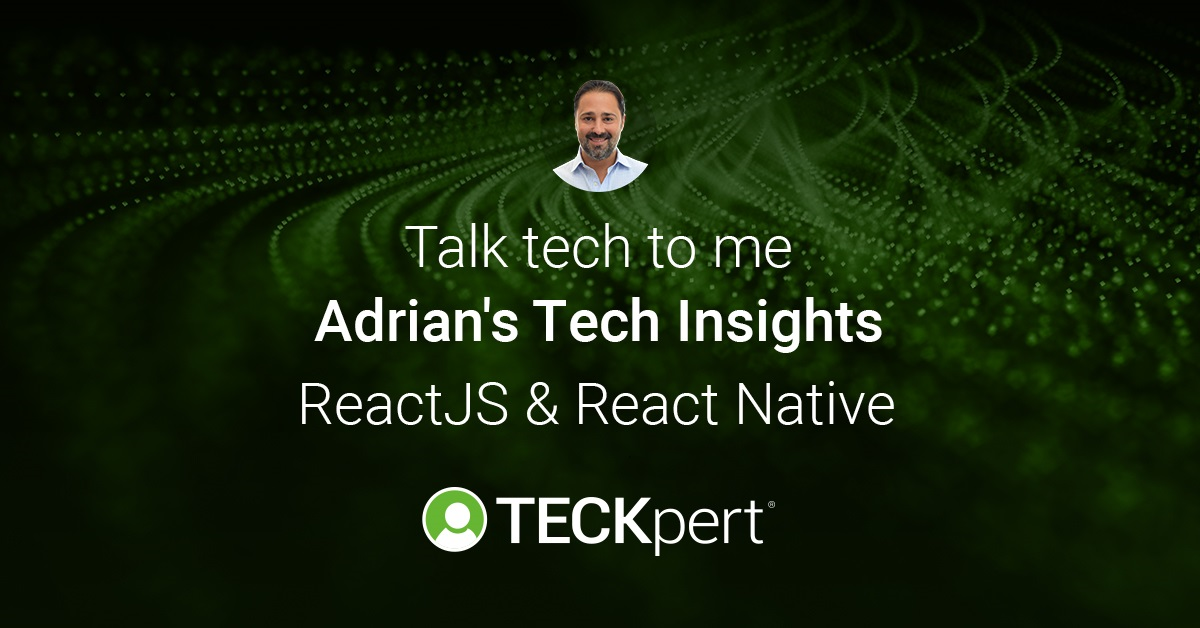 A quick Google search will return a plethora of results with blogs and articles pitting ReactJS and Native against one another. While these tools have different applications; this is less a case of I can do anything better than you can, and more an example of the chicken and the egg.

Let’s dive in. Why do both ReactJS and React Native exist? And when should you use them?

ReactJS & React Native: One Depends on the Other

Let’s jump back in the timeline for just a sec and talk about JavaScript. As a language, JavaScript is behind over 95% of all websites, as of 2019 that number was somewhere in the one-and-a-half billion range. This is undoubtedly due to the fact that JavaScript lends itself more to adding behavioral elements than its structure-based HTML and CSS counterparts.

When the Facebook team set out to develop a dynamic User Interface, JavaScript was a natural choice.

ReactJS or React.js, is an open source JavaScript library. In 2011, a facebook team fronted by Jordan Walke developed ReactJS to marry the speed of JavaScript with a different approach to structuring the hierarchy for UI components.

Dynamic interfaces build on behavioral elements. Facebook’s goal was to create high performance platform synergy to boost the user experience. The Goal for ReactJS was to support simultaneous action across dynamic elements; i.e. live feed updates would still happen while users were active on chat.

ReactJS is not a standalone framework, it’s all about rendering views – and makes up only the view aspect of the Model-view-controller cycle (MVC). The MVC is a pattern organizing the engineering of user interfaces by breaking software structure into three linked elements.

ReactJS filled a need by building a support system between frontend development and servers. It also boosts page speed (which can improve your search ranking) via partial document object model (DOM) refresh.

While a standard refresh model is designed to refresh an entire page, ReactJS operates with a virtual DOM that triggers only a partial page refresh – which decreases page load time. It also contributes to faster programming.

React Native stepped into the ring in 2015 – built by the same team off the success of ReactJS – Native is a complete framework with specific use as a compiler for native app components.

With React Native, code is rendered directly with native APIs not via code wrapping with WebView as with other frameworks like Cordova. This means that the developer has direct access to native controllers that are built specifically to enhance the look and usability of mobile apps.

For example, If you were developing iOS components this would manifest through the use of Objective-C API.

Native doesn’t use HTML or CSS so there is a bit of a learning curve when it comes to syntax. However, if you’re familiar with JavaScript, Native will be easy to pick-up. React Native utilizes the advantages of JavaScripts behavioral building blocks while letting you share code with ReactJS via modules.

Native also accesses ReactJS as its library so developers get the benefits of a virtual DOM based dynamic UI without needing to learn a different language (if they already know JavaScript).

Some things to note about React Native”

ReactJS offered up a stable solution to the marketplace and is widely used by some big names from Netflix to Airbnb that like ReactJS for its reusability and rendering layers.

React Native is in a constant state of development but companies like Bloomberg have made the leap saying, React Native “Is the first tool that truly delivers on the promise of cross-platform native app development.” It’s also good to note that using React Native cut Bloomberg’s development time in half – according to their development team.

A bonus to React Native is that it allows you to reuse up to 90 percent of your code when porting from mobile to web and vice versa, with API communication layers. As an ecosystem, JavaScript is symbiotic, meaning that JavaScript based programs differ because of their end goals, and are not mutually exclusive – there is a usable dialogue between ReactJS and React Native.

In fact, you could think of both as part of a React Suite.

As a whole, the React Suite is ambitious. ReactJS is a library and rendering approach that seriously elevates both speed and usability when it comes to UI. React Native is a framework that’s trailblazing the way app development relates to software engineering.

It wouldn’t be accurate to say that one is better than the other as React Native is effectively a mobile specific extension that uses ReactJS in its applications.

ReactJS and React Native may share the language of JavaScript but you don’t have to speak code to benefit from their applications. If this is all Greek to you, don’t worry – that’s why we’re here.

Reach out today for an Assessment to discover what your business needs are for your next digital transformation – and how TECKpert can make it happen.