There’s no denying that social media has had a huge impact on the world around us. Establishing your brand on these networks is no longer about just selling your product; it’s about capturing your followers on a level they can relate to. Regardless of what industry you’re in, there’s one thing everyone will relate to – major current events. The best way to instantly drive attention to your brand is to relate to what’s going on right now and incorporate real-time marketing into your social strategy.

With award season in full swing and the Super Bowl this Sunday, it’s safe to say a good portion of your audience will be tuning in to these highly talked about events. From fashion faux pas to field goals, you’re going to have trending topics to discuss with the social media world.

Whether you kept up with the Grammys last Sunday or not, you’re likely to have gotten a glimpse of the event via Twitter, Facebook or any other major social network. From live stream tweets and hashtags to Facebook commentaries, the event was trending everywhere online as expected. So, which brand made headlines? Not likely the one you’d expect from one of the biggest music events of the year – Arby’s.

Hey @Pharrell, can we have our hat back? #GRAMMYs 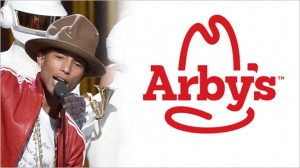 This tweet instantly flooded the internet with 75,000 retweets by Monday morning. Why? It was as relevant as could be with its quick real-time humor regarding a popular event.

One of the most memorable real-time marketing examples comes from last year’s Super Bowl. When the power went out in the Superdome, the light went on for Nabisco Oreo’s marketing team. It was the tweet seen ‘round the social web.

Power out? No problem. pic.twitter.com/dnQ7pOgC

Big brands know they have to step up their game (pun intended) during this weekend’s Super Bowl. It’s not all about the million dollar ads on TV; it’s also about the real-time responsiveness they’re bringing online.

So, while you’re watching the game, keep your smartphone handy to give your audience some shareable real-time content.